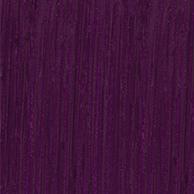 Manganese Ammonium Pyrophosphate, a heavy bold Violet which was first made in Germany in 1868. One of the mid-19th century wave of synthetic inorganic metal salts which influenced a change in artist’s palettes. Manganese Violet has very mild reddish overtones that do not cut through mixes and which some find useful when making reflex or shadowy greys. Its average Tint Power allows it to be added without greatly lowering the tonality of the result.