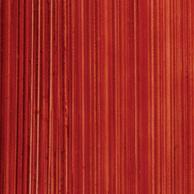 Rose Madder is so incredibly beautiful, a wonderful gift from nature. It is a traditional Lake pigment, extracted from the common madder plant Rubia Tinctorum. The plant was grown in Asia and Egypt for the purpose of dyeing as early as 1500 BC. The Egyptians are credited with developing several techniques to produce a Lake pigment. The best pigment they produced came from plants 18 to 28 months old that had been grown in soil rich with lime and chalk. During the 17th century British army red coats were made with a shade of madder! Please note before some of you email me to tell me that I am mad to put such a terribly fugitive colour in the range let me say in its defense its included for its historic and colour beauty and is simply here to let artists get closer to the pallets of earlier times. Unless you display it in direct sunshine it will last for years with little change. When was the last time you saw a Rembrandt being tested in sunlight, which is the criteria for modern pigments! A favoured colour of the Old Masters.