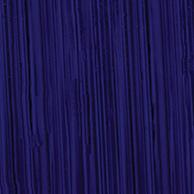 An obviously beautiful mid blue. The discovery in the 1820’s of a Sodium Sulphosilicate compound, which had appeared as a mysterious blue deposit on soda-ash furnaces, was a liberating moment for financially challenged artists everywhere. Up to then the only available version of this compound was the often unobtainable Lapis Lazuli ore, mined in Afghanistan. Ultramarine has a high Tint Power which produces strong reddish blue hues, and makes wonderful violets with Magenta and the red Lake colours. It is useful in greens and greys. The only chemical weakness is a recorded sensitivity to atmospherically borne acids, which can bleach it out. One of the more difficult paints to make, as it forms an intractable runny syrup when first ground into oil, which has to be stabilized with a small amount of wax.